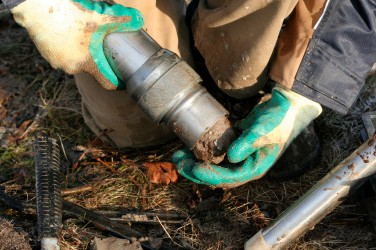 Southern California Project:  Model Human Health Risk from Vadose Zone off-gassing from a Groundwater Chlorinated Solvent plume ZMAssociates designed a soil vapor and ambient air monitoring project to feed data into a localized air dispersion model. The purpose of the modeling was to locate and estimate the emission pathways for vapor intrusion into buildings located above a chlorinated solvent groundwater plume and to assess the effectiveness of bioremediation on reducing the levels of chlorinated solvents in the groundwater and vadose zone above the plume. Modeling and risk analysis provided the evidence required to allow a less stringent clean up standard, and allow for adequate protection of human health and the environment. Once preferential pathways were discovered and zones and routes of exposure were identified, human health risk estimates were developed to guide cleanup targets for the site and to provide decision data for use by building and property managers and building tenants. Data was compiled from two years of groundwater, soil gas, vadose zone soils, and ambient air sampling. Air samples were gathered using EPA Method TO-15 with 6-liter Silica-Summa Canisters over a 24-hour time period. Air sampling was performed within buildings near and above the plume, outdoors above the plume, and upwind for background conditions. An on-site met-station was used to compare wind speed and direction with nearby met data at the time of air sampling. Multi-pathway risk analysis from air emissions was performed using OEHHA, federal EPA, and ATSDR cancer and non-cancer risk factors and algorithms, and preferred methodology for toxic air contaminants. Monitoring data was fed into custom site specifc models to evaluate movement of vapors above groundwater, in soil gas, in the vadose zone, in groundwater, and in ambient and indoor air above the plume. Modeling was performed using DTSC and federal EPA preferred soil vapor 2D/3D models and SCREEN3 and AERMOD air dispersion modeling. This included the Johnson and Ettinger 1991 EPA and DTSC model versions (with 2004 corrections), and Version 3.3 Guidance, and consideration of the following study “Vapor intrusion from the vadose zone—seven algorithms compared”, Jeroen Provoost & Annelies Bosman & Lucas Reijnders & Jan Bronders & Kaatje Touchant & Frank Swartjes, August 2009. Custom adjustments were made to the model to include site specific soil data instead of default conservative values.